It is Carnival season in the UK. Many Caribbean communities across the UK host their annual celebrations of culture food and community spirit.

For a change this year I attended both the procession and the park event on the 18th and 19th of July. I have not been to the park event for many years so was nice to see how good a day it was. Upon entering the park you have to go through metal detectors. I noticed a few people tried to avoid them but security was not messing about. Everybody got searched. Having been to Derby Carnival and others in the past I can understand the need for security and police presence. Some young and old people always come to events just to spoil them for others. So well done to the security and police for keeping everything in order. Also no dogs were allowed at the Carnival.

The procession took place on the 18th. We followed it from the beginning all the way into town. I noticed that the community really turned out to support the carnival. Once the troupes hit town even more people had lined the route to watch the procession pass by. The stage show was alright. I had one minor issue with stewards moving gates in random places after the show had started but it did not ruin my day. Overall a nice show and the sun was out. 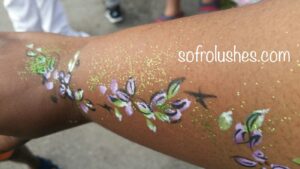 On the 19th the big event took place in the park with your usual carnival stuff. There was so much people on the park. It just goes to show that you don’t have to live in the big cities to enjoy such luxuries and have a good time. There was face painting for the kids and fair style rides. Loads of food stalls and plenty of music. Many local acts entertained the crowds followed by a feature performance by Reggae singer Etana.

This marks the 40th year of the Derby Caribbean Carnival hosted by the Derby West Indian Centre which also celebrating its 60th year anniversary. If you live in Derby, especially if you are of Caribbean descent make sure you join and make use of the community centre. Check out my video of the procession which also includes a snippet of the park event too.

You can find out about other carnivals across the UK  throughout the summer on the ItzCaribbean website.