The Blessing and Curse of the Hottentot legacy 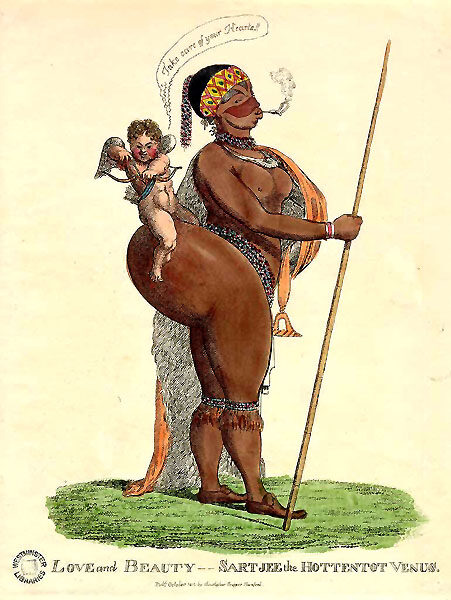 When Europeans invaded Africa for their selfish gains and general curiosity they encountered a people who contrary to popular belief were well fed in some parts. Their body shapes were somewhat different to what the explorers imagined. Traditional European women shapes came with little to no curves in comparison. Their curves were achieved by slipping into tight breath taking corsets that pushed the breasts upwards under the chin and squeezed the waist in. This gave the impression that the ladies who wore this style of dress had a tiny waist with womanly curves.
Sara Baartman hailed from the Khoi Khoi tribe in what is currently called South Africa. She was taken from Africa and paraded around Europe during the 19th century as part of a freak show. She was referred to as the Hottentot Venus. Her people were referenced with the name Hottentot however the correct name is Khoi Khoi. Venus completed her show piece show name in reference to greek goddess of love. The crowds were in awe of her large derriere and gawped at her genitalia. When she passed away a revered European scientist dissected her body and put her private parts along with various body parts on show. In 2002 her remains were given to South Africa and given a proper burial.
Fast forward to 2011. Women of African descent are dotted all over the globe. Come in all different shapes and sizes. The general consensus is that to be a Black woman means you automatically have curves. We get ridiculed for having a big bum or big boobs. Yet when we are lacking in these things we are ridiculed. I have heard so many non Black folk complain about Beyonce’s shape yet get happy for Jennifer Lopez. I never thought of Jennifer having much of a bum to get hyped up about to be honest. She just had an “acceptable” shape.
In recent years the emergence of HipHop video vixens has had a major influence on the size of some women’s bum. Some celebrities are known to wear butt pads to fill them out whilst some have resorted to illegal cosmetic treatments. It is highly speculated that Nicki Minaj’s bum is not really hers. You know the paparazzi will be on the look out when she hits the beach. Kim Kardashian is a non Black celeb who is known for her bum as much as her sex tape. Bums have remained part of the European obsession.
The irony is that now you have young girls who already have shapely figures seeking to enhance what they have. This week emerged a story of a young British Black woman who travelled to America for an illegal back door silicone injection in the bum. Her aim in life was to be a video vixen in American Hip Hop videos. Based on the imagery and what she supposedly was told, she needed a very curvaceous bum. That silicone injection that was to lead to fortune and fame killed her shortly after.
So when you look back at the over sexualisation of Hottentot and the legacy it left behind. Black women having huge bums and breasts are in one hand ridiculed and in the other lauded as sexual goddesses. I have been told on many occasions by white work colleagues that I have a “Black girls bum” and whether or not I can move my bum as they do in the videos.
The blessing is that Black women’s natural shape (various of course) are generally accepted as the norm. The curse is for those who do not fill a stereotype are now going after a very much sexualised image that can only be linked back to Hottentot. The saddest part of this it is being fuelled this time both internally and externally.
What are your thoughts?
Share :

When opinions and comments ruin your flow