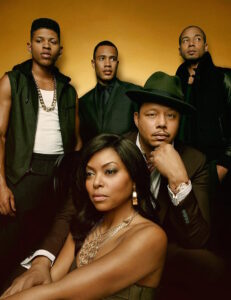 Empire is just one of those shows that you get hooked on really quick. It has had a very successful run in America and in cyberspace. It has an African American casts with cameos from others. I say others because there was that awful piece by Latina.com who felt short changed because there was no main Latino character. You know there is a Latino character in Empire. Though Latina fails to display the beauty of Afro Latinos and fail to realise that some of the main characters could be Latino. In fact many Latino’s will be able to relate to the melanin rich cast as they themselves have a plethora of people soaked in melanin. I digress.

So whilst my friends and FB feeds were filled with Empire musings and my fave Youtubers were discussing the plot I was like what is this all about. Till one day I found a link. I watched 6 episodes back to back to catch up. Each episode ends in a way that makes me want to look out for the next. UK TV channel E4 has just begun showing the series. That is really quick for an American show to reach the UK especially one that consists of an all Black cast. The UK has next to no TV shows showcasing a relatable Black cast. Black writers are truly spread thin in the UK. Back in the day we had Desmond’s and its spinoff Porkpie. Less we forget the Real McCoy of which many Asian actors who had recurring roles went on to star in Goodness Gracious Me and did not bring along any from the African-Caribbean community who helped their TV presence.  The Crouches however was written about a Black UK family yet none of the writers were Black. It was ill received by the community and the criticism was appropriately given. The producers did add a Black writer as time passed but it was too late.

Empire is brought to us by Lee Daniels who brought the film Precious to life that starred Mo’Nique and introduced the world to Gabourey Sidibe.  It stars Terrence Howard, Taraji P Henson alongside Jussie Smollet, Trai Byers,  Bryshere Y. Gray and Grace Gealey. Empire centres around a very dynamic Black family that runs a music business. There is competition by all to run the family business which creates conflict and very good TV. The musical backdrop is produced by legendary producer Timbaland, of which you can purchase the chart topping album of the show and sing along to your hearts content. According to BBC news,  Taraji thanks UK Fans for streaming the show. Although the E4 execs feel this is bad due to revenue possible losses from advertising. I feel that most who watched it online will be watching it all over again on their TV screens. Why because the show is really that good. It may not be for all tastes but the formula works. Most of the people I know who has watched it already have tuned in to E4.

The Independent asks if UK audiences are ready for an all Black dynasty. I can only assume Chris Bennion who penned that piece is not aware of the UK Black audiences who have been ready for a quality show that would pique their interests as its not filled with degrading stereotypes. At last a show that appears on a UK TV screen that is not called Top Boy but about business in the corporate world and the strong bonds of a family that consists of a Black mum and dad living the good life despite some challenges. There is that backstory of rags to riches and an insight into shady corporate business dealings. Have you noticed how well the actors have been cast. Everyone has a similar complexion. I know you can get all different shades of browness in a Black family but TV shows often like to show extremes or unbelievable castings.

In the UK, Black creatives have turned to Youtube and Amercian shows to fulfil their needs. Another American show that resonates with UK audiences is shown on BET called Being Mary Jane. I watch that show even though the main character irritates me so much. Yet she is a successful Black woman doing well in life which I don’t see on UK TV or media.

So is the UK ready for an all Black TV show. Ask Sky Living who acquired the rights to Youtube web series Venus vs Mars. Or ask the makers of Youtube hit Brothers With No Game. There are so many popping up why because there is a need not just for the mainstream voyeurism but for the people who would rather switch on the telly and watch a good show that features their reflections in a positive light. Most people will watch a good show regardless of what the casts looks like. You just have to have a good quality show.

More sir, can I have more Black TV shows on UK TV.

Bring Back Our Girls