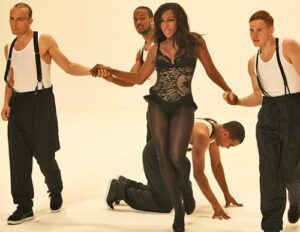 I am starting to think I actually do like Alexandra Burke as a fan. She can sing well. I just wish her Management team would manage her talent better. It is not like she has not good original songs that people enjoy. She is the up-tempo X-Factor winner compared to Leona’s slow motion vibe.
This new single is produced by Red One who has made hits for Lady Gaga, (what was the) Sugababes and many others. It has a nice summery reggae influenced background. So the inclusion of Laza Morgan a Reggaeton artist fits perfectly. Many UK folk will be surprised by this video as it is not what was expected. Not so long ago there were video clips of her dancing in America and driving in ice cream vans. I do wonder if that means they have made two videos for two different audiences. They could have combined the two.
I don’t get how the current sparkly light semi naked man video suits the song.  It would have been nice to have a summery vibe to the video. But I guess men will be pleased to see Alexandra dressed in see-through lace and leotards. As for the men in the video not sure who they appeal too. Maybe its just me as all the men do not look as hot as can be.
Anyway I do like this song. It is definitely catchy and may just be a hit. This song will feature on the re-released version of her album Overcome in November. Start Without You is available to purchase from 5th September.
Previous Post: « Help me de-clutter
Next Post: ORS Olive Oil Edge Control »