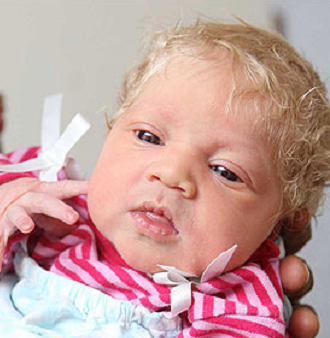 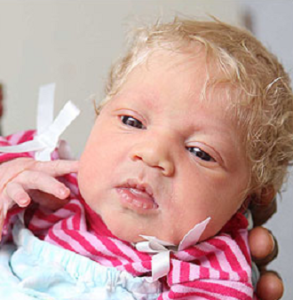 A couple in London who originate from Nigeria gave birth to their third child a daughter whom they named Nmachi, which means the beauty of God. The reason this has become a worldwide phenomenon is because the baby girl did not inherit her parents complexion or even a smidgen of it. Her complexion is what people call white skin, very pale with next to no melanin in her epidermis. Doctors have already ruled out the baby from being an albino. She has golden blonde hair and blue eyes. Of course scientist want to find a mutated gene or something to justify to them a black woman giving birth to white baby with no assistance from them. Both parents do not to their knowledge have any white relatives in the family history. The Father describes it best:  “All that matters is that she’s healthy and that we love her. She’s a proud British Nigerian.”

This is not the first time babies have come out a different “race” from their parents. Twins in the past have been born two separate races. I watched a film called Skin about a white South African couple whose second child is born black or mixed race in appearance and hair texture etc. Sandra born during extreme racism in South Africa faced many obstacles of acceptance and identity. It is a film worth watching if you can. So this is nothing new but doctors and their scientist friends who claim they are looking for that wonder gene or clue will always want to test and theorise as to who what why.
To me this is one of those events that will continue to happen. Whether in Sandra’s case it is a throwback gene or in Nmachi’s case no definite answers. It is as though God is letting the world know “race” is a man made concept and we all stem from the same yoke.
Here is a link to the video Interview with the Sun Newspaper
Share :