Who would have known that the highly respectable and very British shoe brand Clarks would be such a popular brand in Jamaica. I am told by relatives Clarkes have always been deemed a decent brand always a fashion yes. Though now with the ever growing popularity of the song “Clarks” by controversial and very popular Dancehall DJ Vybz Kartel alongside Gaza Slim and Popcaan, Clarkes have gained a renewed interest. The song, the delivery and the lyrics are just so catchy. Even R&B singer and dancer Omarion quoted the song on his twitter recently.

In the song Popcaan sings “ a whe yuh get dem new Clarks deh dawdie…di queen fi England haffi love of yardie”. Vybz sings about the style of Clarkes and how they are worn “Real bad man nuh model inna shorts, straight jeans cut off foot pants, everybody haffi ask weh mi get mi Clarks , everybody haffi ask weh mi get mi Clarks, di leather hard, di suede soft, toothbrush get out di dust fast …” Vanessa Bling aka Gaza Slim says “wear di desert Clark fi easy step…”
I did not get it straight away about the fashion for this one. However my fam explained to me that the way, Clarks in particular Dessert Clarks are worn is with straight leg jeans and the bottom of the leg is cut off. Fashion over style! Clarkes is available to buy on I-Tunes and is now gaining overseas popularity. This song may become one of the biggest Dancehall Reggae songs on an international level. 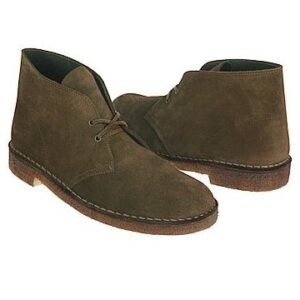 I wonder what the people at Clarks think of their popularity.
You can purchase the single Clarks on iTunes right now.
Previous Post: « Has Justice Prevailed
Next Post: Fitness at any age »