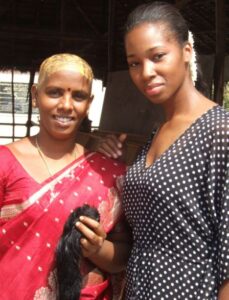 I have just watched a documentary about human hair extensions. It is called “Jamelia : Whose hair is it anyway”. If you was not able to watch it tonight do look for repeats or try the the BBC I-player online.

Jamelia is a UK R&B/pop singer who wears weaves for her performances. As part of the BBC’s season on beauty Jamelia set out to investigate the human hair industry as well as the origins of the human hair extensions she wears. The documentary began at an elite hairdressers in London whose clients pay thousands of pounds for full head of hair extensions.

About her own hair she says this;

Although for a black woman I would be described as having ‘good’ hair – because it is long and straight – naturally, it is not luxurious, thick or sleek enough to meet the demands of the endless photo shoots and concerts I am involved in for my career. (source)

Black women have worn hair extensions going as far back as the ancient Egyptians and further. If you were to look at some tribes of modern day they are extending the hair. Both girls and boys grow up getting the hair done. Of course boys once they reach a certain age shave their hair off and some go through cycles of having hair and no hair. Girls often wear braided extensions, wefts of hair, pony tails etc with or without extensions. Both human and synthetic hair is used. I liked the fact that Jamelia mentioned the Jamaican belief that cutting hair before a certain age can cause speech problems.

Anyway, the documentary lead Jamelia to Russia where traditional folklore saw that women had long flowing hair down their back. A girl of about 13 yrs old sold her hair, which the hair stylist Jamelia travelled with simply cut the loc’s of hair off with a scissors. Leaving the girls hair in a bob. She got paid what was equivalent to a months wage.

Jamelia also had her own human hair extensions analysed by a hair expert. Which brought her journey to India. In India it showed that hair was collected from hair brushes and from people of various ages. Temple hair being hair that was given up as a way to sacrifice ones beauty and to thank God. This hair is sold by the temple and money is used into the community.

I really found this documentary intriguing. When I was younger I thought human hair extensions was creepy but my friends wooed me over. So whenever I could afford it I would wear it. However these days if I wish to extend my hair it is strictly synthetic hair. Synthetic hair these days looks just as good in my opinion.

The documentary does make you think though. Hair is being sourced from anywhere possible so people can eat their daily bread. On the one hand it would seem maybe buying human hair is morally wrong if it has not been sourced ethically. On the other hand if demand drops and no one is buying, some people will not eat.

It was definitely thought provoking.