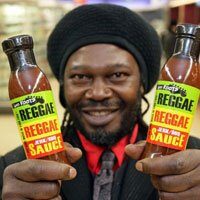 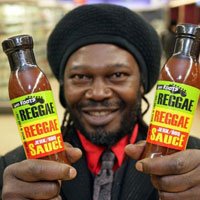 I often watch reality TV and Dragon’s Den is no exception. Of course not all reality TV programming is worth viewing. Anyway so I was watching Dragon’s Den and up the stairs comes Levi Roots dressed in a suit playing a guitar and singing the theme tune to his sauce. I was in awe. A black business man staying true to his self. Of course there are many Jerk sauces on the market from Grace, Enco, Walkers Wood etc but Reggae Reggae sauce is different.

Levi presented the Den with samplings of his sauce and how it can be eaten which they all enjoyed. He was looking for £50,000 in exchange for 20% of his business. Bwoy did he sweat some when the Dragons dismantled his figures with question after question. He held his own and in the end he got what he want however gave away 40% of the business to two Dragons.

Sainsbury’s had the initial exclusive rights to the sauce and began selling in March 2007. Sales were predicted to be around 50,000 for the 1st year. Triple that amount was sold in the first day alone. I am on my 3rd bottle. The sauce has a kick that settles itself after the second or third bite. My husband has called me many times to but the sauce for his friends. He remixed it with a bit of honey to make chicken wings. Yummy!

There is now a recipe cook book and 3 different sauces available to buy in most of the major supermarket chains in the UK. The original Reggae Reggae sauce, Love Apple Ketchup and Fiery Guava Dipping sauce. I have yet to try the new sauces as yet so cannot compare. If you have tried them I would love to know what they are like.

Subway currently are doing a limited edition Reggae Reggae sauce subway. If I am out and about tomorrow, I will see if any of the many subways near me are selling it. I wonder what it will taste like alongside south west sauce…mmm maybe not a good idea to mix. I guess they are doing it as its Carnival Season and London’s Notting Hill Carnival is not far away.

Read more about Levi Roots’ music and sauces on the Reggae Reggae website. Have you tried some, how was it for you. If not the price will not hurt your pockets as it sells in most supermarkets for about £1.50 to £1.99.