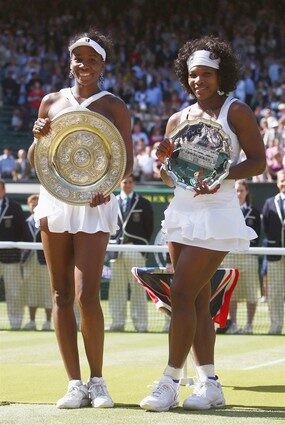 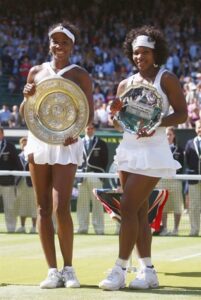 I was so happy for Venus when she won. I was a little distracted as I had been cooking some seasoned rice. However I enjoyed the match. Serena expressions were telling. She doesn’t take well to losing however is humble in her own way.

Venus is very laid back and so humbly sweet. After defeating her little sister to become 5 times Women’s Wimbledon Champion 7-5 6-4 she vowed to win the doubles match for her. How sweet. Venus and Serena went onto win the Women’s doubles final, retaining their 100% record.

Over the years the sisters have gotten a lot of flack just because they are sisters. Accusations of match fixing and other stuff like that. That is just pure jealousy. There are few sisters in the WTA which if I recall correctly did not progress in the tournament. Those jealous players , tennis old schoolers and the media should just applaud the girls for what they are brilliant tennis players.

If it was not for them the women’s game would have not progressed the way it has. Now you need to be more than just good at the game. You have to be highly skilled and athletic. Just think of Zheng Jie the wild card Chinese player that not only knocked out the number 1 seed but went onto demolishing another seeded player. Will Buckley gives a decent commentary in this article.

I have not been keeping up with the men’s game for awhile since the hey days of Andre Agassi and Pete Sampras etc. So here I am at home watching the match to be wowed and awed. I have respect for both Nadal and Federer. The men’s final lasted over 4 hours. Two tie breaks which saw Federer fight his way back and the final set ended with a score of 9-7. I have never seen that before . My best bit of the match was when Nadal hit the ball without facing the net and then spun round. classic. He deserved to win. I like it when men cry sometimes. I was sooo happy for him but equally disappointed for Federer.

Wimbledon brings out the best in players. Pictures from the tournament can be viewed here.