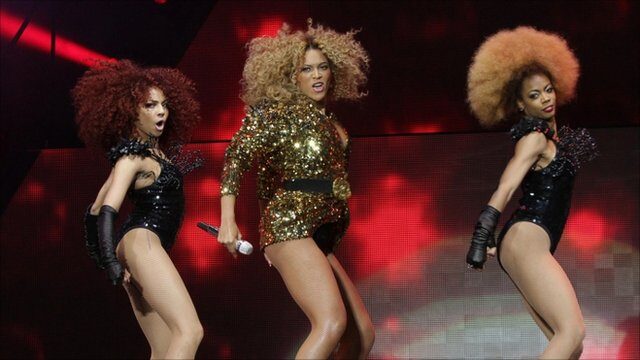 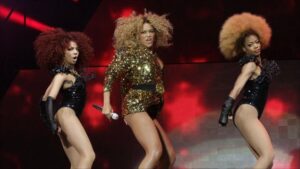 I was not sure what to expect. However I only ever watch bits of Glastonbury festival for artists I like. I do try to branch out, but my core musical tastes are very well set in stone. Glastonbury takes place on a farm in Somerset every year. Where rich and underprivileged folk roll around in mud in the English countryside just to listen to various artists sing over a weekend. Now these tickets cost anywhere from £200 for a basic ticket to £900 for a Tipi. So much money to roll in mud surely a mud spa would be more enjoyable.
Beyonce was made the shows headline and closing act for 2011. Her appearance did not bring the hate that her Husband’s appearance did a few years ago. As far as I am concerned she gave a stellar performance. She did  old and new songs including a Destiny’s Child medley and a few classics from other singers. She even sang Happy Birthday to her friend in the audience. I love the way she bigs up her old bandmates all the time. Just proves girl groups can be friends.  The shout outs to Kelly and Michelle came before the DC medleys. Beyonce’s performance lasted a very long 1hour and 30minutes. I am not so complaining the length just that I had work the next morning. Song after song kept coming. It made me realise just how much great materials she has. I now wish to see her in concert.
I was on the verge of buying her new album ‘4’, however decided i will wait one more day for the deluxe version. I just cannot but an album twice. Plus the deluxe version just has 3 new tracks and 3 remixes of Run the World.
Oh yeah today at work I overheard two guys talk about how impressed they were with Beyonce’s performance in heels and singing and dancing to such a high quality for so long. I agree. Now if only high heels did not hurt my feet so, I would get my dutty wine on but Yard gal style woiii.
Share :